Persistence Pays Off: The Snowvation Story

The lively, warm and welcoming community we’ve cultivated at Thrive Workplace is anchored by the unique members that comprise our community and the special skill set each individual brings to our workplace. This member individuality helps allow us to develop a creative and sophisticated community where members bounce ideas off each other and even collaborate on projects together.

The road to success is paved differently for each member, but Thrive Workplace offers entrepreneurs and employees from countless industries the tools they need to succeed in a community that encourages collaboration and fosters innovation. For one valued member, Michael Stocker, founder and CEO of Snowvation, Thrive has significantly helped pave the road to success.

Michael sat down with us to discuss his trials and tribulations, how Snowvation got to where it is today, what he likes about working here at Thrive as well as tips and advice others can use to flourish — regardless of the industry they work in.

Growing up in Pennsylvania as an avid skier, Michael spent several years as a certified ski instructor where he noticed numerous inefficiencies in the ski industry’s technology and operations. In an attempt to bring the ski industry into the 21st century, Michael founded Snowvation. Snowvation offers a cloud-based SaaS to ski resorts offering everything from back of house resort management to e-commerce and online bookings for resort products. Snowvation also owns and operates ShredBetter.com, a Yelp for ski & snowboard instructors. The company launched its product in May 2016, and in the time since its initial launch, there have been plenty of ups and downs, but through the challenging times, Michael kept the big picture in mind and continued to push forward. 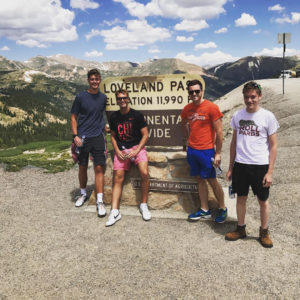 Some of the Snowvation team members on a hike.

Immediately following the launch, Snowvation struggled due to the company’s lack of credibility in the U.S. market.

“Having just launched, our intention was to find early adopters in U.S.,” said Stocker. “But, we were unestablished, had no track record, and the ski industry is usually unfriendly to outsiders.”

One way that Michael and the Snowvation team overcame their initial challenges was by determining how quickly, where and when to scale their business. Despite their initial focus on markets in the United States, a unique, but risky opportunity presented itself over seas and Michael asked himself: Are we ready to scale internationally? Is it right time? What impact will this have on our plans in the U.S.? The answers to these questions helped Michael determine Snowvation’s scalability strategy, helping the company eventually take off.

Worried about where to go next, the opportunity to do business in China presented itself. Scaling into a country like China was rather risky, but Michael recognized the potential upside of getting into nascent market.

“Nearly all of my advisers said ‘absolutely not, focus on the U.S.,’ but the opportunity was effectively a no-brainer for me,” he said. “When opportunities that seem risky are presented, I think it makes sense to second-guess people respectfully and make the best decision for the company. Startups are inherently all about risk.” 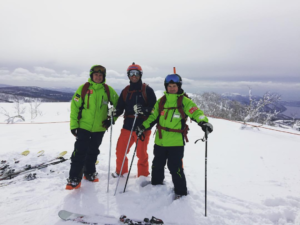 Michael pushed forward in China despite his advisors counseling against it. Ultimately, entering a new market allowed Snowvation to establish themselves as an industry leader in China, demonstrate traction and a global opportunity. Snowvation’s partner resorts are happy with the platform and they “became evangelists” for the product, recommending it to other resorts. Michael will be heading back to Asia soon to increase their regional presence and overall, he said the decision has been worthwhile.

By keeping his eye on the big picture early on, Michael was able to realize when it was the right time to scale internationally, leveraging the potential to sell Snowvation’s software to a ski resort in China. By partnering with Genting Resort Secret Garden in Chong Li, China, the designated venue for ski competitions during the 2022 Winter Olympics, Snowvation got a sizable public relations boost, which helped propel their efforts in the U.S. forward.

“The big-picture here is that as early-stage startup you don’t get many opportunities where something good just falls into your lap,” Stocker said “Take advantage of those opportunities.”

“For us, being persistent in everything we do has been the key to success,” Stocker said. “This is especially important for B2B companies dealing with difficult enterprise sales cycles and buyers.”

Early on, Snowvation was rejected by countless ski resorts, but Michael and the Snowvation crew didn’t run to hide or get too upset about losing out on potential deals. Trying to secure funding and put together early adopters is certainly challenging, but as the Snowvation story exhibits, persistence pays off. 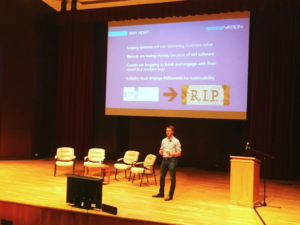 Another significant benefit for Snowvation on their road to success was operating out of ThriveWorkplace. Here, Snowvation has access to a network of investors, including their investors, Rockies Venture Club (RVC), right across the hall from their office, as well as the infrastructure necessary to succeed and thrive.

“The development of a friendly place we can recruit from and bring customers to has been incredibly helpful to us,” Stocker said. “I love the collaborative environment, the relationships that are fostered, our network, and having our investors here is icing on the cake.”

If you see Michael or any of the rest of the Snowvation team around the work space, be sure to say what’s up! 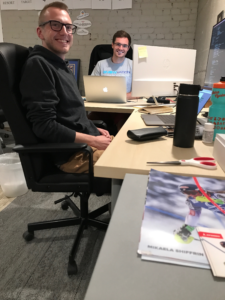 About the Author: Alex Neil